Haley Burkhead is an entrepreneur and CEO of her business, a membership site that helps entrepreneurs reach their first million dollars via their own course or membership site. Although Haley was making the concept of recurring profit work for her own clients, she was running into her own issues with the concept by only offering live offers; primarily live webinars.
Since working with Haley and her business, we’ve been able to develop her sole offer of live webinars into valuable evergreen webinars and materials that coincide with her message of the value of recurring profit.
We are so impressed with Haley and her team and appreciate how willing they are to embrace adaptations and suggestions to the process!

Due to the nature of Haley’s live webinar funnel, she felt under pressure to constantly be creating new topics, new offers, and new content in order to stay relevant with her audience. She needed a strategy that would allow for her offer to remain evergreen - decreasing the amount of original content required of her, and allowing for her to achieve her own form of recurring profit.

We dove into Haley’s planning strategy, suggesting that Haley focus more on evergreen webinar content as opposed to the live content that she was focusing on prior to working with Team Hirsh.


With this new strategy, we focused on her funnel and customer journey. Initially, Haley’s customers engaged with her after her webinar, then were directed to an application, and then were directed to book a call.
Our team implemented a new strategy, where we decreased the number of interactions with the customer by shortening the process. Instead of moving the lead through a journey of webinar, to application, to book a call, we shifted the customer journey to straight from the webinar to booking a call.
With this approach, we soon realized that the application step of the customer journey was necessary, as many of Haley’s leads were “no-showing” for booking calls. The application step proved necessary, as it was the main qualifying component of Haley’s customer journey. Once we had this information, we readjusted back to Haley’s original funnel - webinar, to application, to booking a call.
We noticed that Haley’s audience either fell into two categories; the category of wanting to scale an idea to profitability, or the category of quickly scaling an already developed course or business.
This prompted a shift in our strategy, which resulted in a total of three funnels; one for “Idea to Profitability,” one for “Scaling” when it came to an existing membership or course, and one that encompassed both offers. The strategy behind this approach was an attempt at higher conversion rates and included messaging specific funnel and audience. We have noticed that with separate funnels for each offer, Haley’s cost per lead has decreased, but we are still waiting for her to complete her full 90 days at the end of December before receiving final sales metrics.
In order to engage with her audience on a different level, our team suggested a few different approaches. These approaches included engaging with audiences through a restructuring of angles and ad creation. One angle that Haley had not yet tested at this point with her audience was motherhood. This approach ended up becoming one of her highest performing ads. With this information that we received from her audience’s response to this new angle, we were able to shift our messaging and targeting to resonate with and relate more to her audience.
For creative, we tested three main types: GIFs/animations, visibility ads, and videos. When Haley and her team hosted live events, we were able to take snippets from the content of her lives and repurpose them into visibility ads. We found that the best performing creative was a video ad with Haley, holding her new baby, explaining automations and sales. We believe that this was Haley’s highest performing ad due to the fact that this creative and angle resonated most with her audience - professional, successful mothers. After seeing this result, we were able to tweak and hone in on this creative angle and audience.
Moving forward, Haley was able to use the information that we gathered from her ad results to not only boost her overall ROAs, but help her implement an evergreen strategy into her own business, increasing her OWN recurring profit, and further illustrating the importance of her business and offer.

With the help of our team, Jeanne has been able to help countless other health and wellness professionals remove the frustration and overwhelm associated with having to generate a constant stream of content.
Especially in this new era where content marketing is becoming increasingly essential, Jeanne’s products are invaluable to these entrepreneurs who are, in turn, impacting the lives of countless other people on their journey to improved health and wellness.
She was also not only able to break even with her ads (a huge milestone itself), but achieve profitability!
She’s also found so much more clarity on her ideal customers, which has in turn improved the overall quality and connection of her messaging. 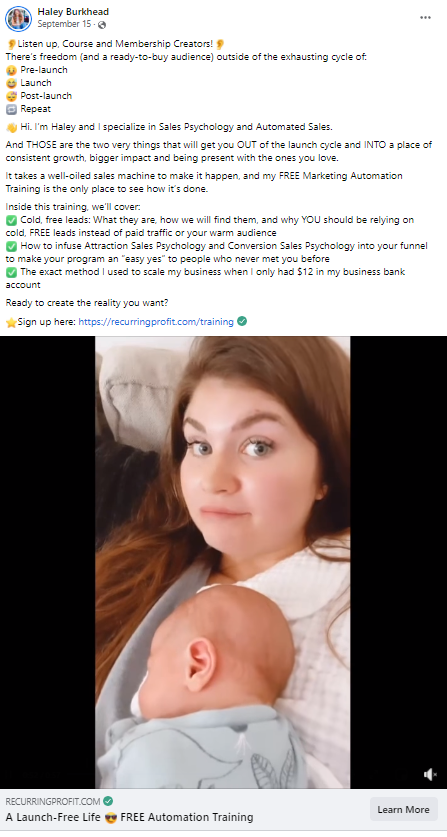 For Haley’s ads, we wanted to implement a few different creative angles. These creatives primarily included GIFs and video ads, with video ads gaining the most traction. When pairing this type of creative, with video that resonated with Haley’s audience, and creative copy that honed in on her targeted audience’s pain points, we were able to see a large amount of success with an updated creative angle approach.

Honing in on your audience and maintaining

By being willing to update, change, and even remove audiences that weren’t responding positively to Haley’s messaging, we were able to hone in on the exact age range and target audience that resonated with Haley’s business best and maintain that audience. We found this audience to primarily be professional mothers and/or parents in the age range of 30 - 45.

Haley and her team trusted the process by being willing to implement new ideas, new
strategies, and new audiences. Because of their openness to these new ideas, creative, and their dedication to the Hirsh process, they experienced incredibly high ROAs and ROI, and we can’t wait to see how well Haley’s ads perform at the end of her 90 days!

BEHIND HALEY'S CAMPAIGNS WORKING ON YOUR MARKETING!

APPLY TO WORK WITH US